For sports teams set up with score tracking set as points for and against, the Team Record will appear on the home tab for the team under Status Report. 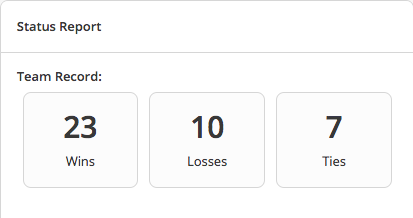 To reset the team record that appears on the Home Page, the preference is to have the team owner Start a New Season by following the steps to archive the season. When you archive, you will be able to start with a clean slate for your schedule or you will have the option to start the season from a specific date so that certain games remain on the team record. Starting a new season will save the current season as a read-only archive.

* The Start a New Season option is available for all teams using paid plans and can be performed only by the team owner on record, this feature is not part of the Free Plan

This option is found under Manager > Seasons > Reset Current Season

* Don't see this option for your team? The Reset Current Season option is available for independent teams using paid plans and can be performed only by the team owner on record, this feature is not available for teams under a club and league umbrella or with the Free Plan.

Reset Team Record By using the Not For Standings Option

If your team is using a Free Plan (Season Management is a paid feature) or if there's another reason why the team does not wish to archive the previous season, a designated team manager can go to each game that has a score entry and edit it so that it does not count toward standings by checking the box that says "Don't count this game toward standings". Depending on the number of games, this could be time consuming, we do recommend the archive option as a best practice. 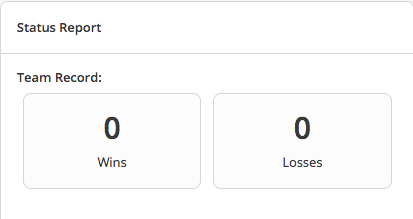 Did this answer your question? Thanks for the feedback There was a problem submitting your feedback. Please try again later.
Last updated on November 2, 2019

No results found :( Looking for your team? You can search for it here! <a href="https://go.teamsnap.com/login/find_my_team">Find My Team</a>